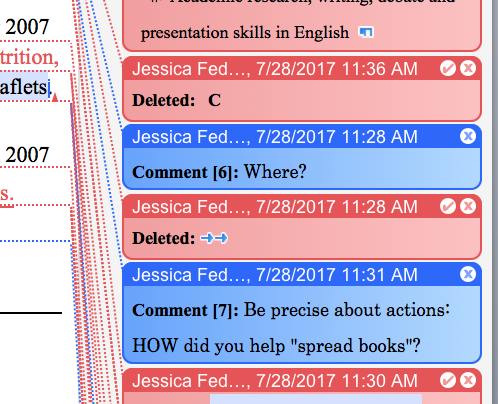 It's time to say goodbye to "Track Changes"

In 1986, Microsoft released Word for DOS 3.0 which had an exciting new feature. At the time it was called “revision marks” – the predecessor to “Track Changes” a feature that would change the way people collaborate on documents. By the 2000s, Track Changes would become used by millions, as collaborators wrote and rewrote carefully crafted text. For a long time, Track Changes made a lot of sense. You could see all change history without manually comparing documents. Others could suggest alternate wording, and there was control since each change you could accept or reject.

But there was a problem, different versions of the file would float through email inboxes gathering different edits. People would provide feedback on old versions, leaving the author to reconcile differences. Some would ask questions that needed to be answered to be resolved. It wasn’t perfect, but hey – that was the best way to do it.

Cloud-based versions of Microsoft Office hoped to fix these issues. No more version control problems, your document was always up to date in the cloud. But with this connectivity came a crush of collaboration. Many people working on a document left comments threads everywhere, endless rounds of text exits and no one really in control.

The end result was a user experience nightmare.

One person holds the pen

Letting everyone edit the document results in chaos, especially with many collaborators. Well-meaning collaborators can’t help but wordsmith carefully crafted copy that isn’t wrong, but just isn’t how they would have written it. I once got so fed up with Legal re-writing marketing copy that I put it in black and white terms – will anyone go to jail or will we get sued if it’s written this way? Have one author that filters the feedback. Managers need to empower these authors to have the final say, so long as it stays in the legal and compliance guardrails.

With one author, it’s easier to group feedback and make changes in specific versions. Rather than an endless stream of feedback. A single author is making the changes and structuring feedback into rounds. With this, the comments made are only about the latest version, keeping the noise down.

While versions were an improvement in some regards, there is a tradeoff. How do I know what changed from the last round? Google tried to tackle this in June with its “Compare documents” tool. While it does do a decent job of showing copy differences, it’s a bit clunky. By choosing two documents to compare, it generates a third document and the context it has to the other 2 documents is lost. While this works great for word processor type documents, there is no way to compare professionally designed documents that are more likely in a PDF format. While the feature is neat, the book is hardly written when it comes to giving people good context on how content has changed over time.

We think that versions are the way forward. And while this has a different set of tradeoffs, there is more innovation to come in how we show how content changes over time. In the meantime, knight your rockstar writer with the pen and let them work their magic.

Discover how Papercurve manages version control with Compare Versions. If you want to see it in action, book a discovery call!